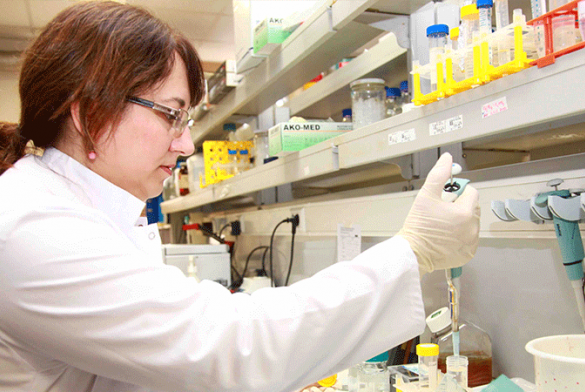 A vaccine developed by Boğaziçi University has been patented by the European Patent Office.

A new vaccine technology developed by the scholars at Boğaziçi University, which has been patented before by the US and Japanese Patent Offices last year, has obtained a patent from the European Patent Office. This vaccine has been invented by Turkish scholars and it is distinguished among the other technologies by its ability to be more durable: it can endure without degradation for at least 30 days at room temperature.

The invention by Prof. Dr. Nesrin Özören from Boğaziçi University Molecular Biology and Genetics has received the title of “triadic patent” as it received patents from three different patent offices: US, Japanese and European. Turkey’s first and only patent in biotechnology is now under the protection of three different offices and domains. “Microsphere Technology for Durable Vaccine Carrying Proteins” is expected both to attract international investors and to be effective against such diseases as avian influenza, swine influenza, and Zika.

Prof. Dr. Nesrin Özören from Boğaziçi University Center for Life Sciences and Technologies and Boğaziçi University Molecular Biology and Genetics department has received a patent from the European Patent Office for her invention “microsphere technology for vaccine carrying proteins that can be stored in room temperature for 30 days” after US and Japanese offices. This new technology, which has been in development since 2009, will allow vaccines to be transported everywhere on earth without the need for a cold chain.

Özören highlighted that this new system developed at Boğaziçi University does not yet exist anywhere in the world, and added “There are some different carrying systems used in the vaccine technology around the world that focus on the usage of liposomes and nanoparticles, but this technology we developed that is making use of microspheres is very different. Our invention relies on the durable structures which are composed of APC protein’s fiber structures bending over one another and forming a ball-like structure.”

Prof. Dr. Nesrin Özören remarked that Turkey is finally understood the importance of developing its own vaccines, thus starting to invest in relevant research, and indicated that her invention has received the title of being the fifth triadic patent in Turkey. She reported, “Our ASC particle system can be used in developing composite vaccines as well as possibly being a vital part in developing or enhancing vaccines for new viruses such as Zika or against tumors.”

Prof. Dr. Özören explained that the next critical steps for this invention are Phase I and Phase II clinical trials and further commented “The first clinical trial on anti-tumors we’ve conducted on a mouse yielded positive results. Upon doing animal trials, we’ve proved that ASC particles are an effective way of transport; now we need investment to further this study. This vaccine and this study will allow developing and producing vaccines in Turkey that are not the unoriginal copies of the inventions of other countries or companies. Science world may be revolutionized due to our invention.”

New technology allows vaccines to be stored in room temperature

Current vaccines used around the world are produced by adding only the most immunoresponsive components and such components can only be stored in 2-8 oC degrees and stable conditions. Prof. Dr. Özören mentioned that their invention proves that it is possible to use ASC particles to carry other molecules (antigens) and these can be digested by macrophage cells. She remarked that should the cell or the body be breached by a virus or a microorganism, this mechanism gets triggered, thus eliminating the microorganisms in the infected area. The inventor added that the ASC particle carrier protects the antigens loaded on it against freeze-thaw cycles for 30 days, therefore making it possible to transport vaccines developed using this technology everywhere around the world in normal temperatures instead of the stable and limited conditions required before by other technologies.

The new invention is attracting investors

Founding Partner and Honorary President of Ankara Patent Office, M. Kaan Dericioğlu also commented on the newest triadic patent of Turkey, “If an invention receives patents from US, Japanese and European Patent Offices, it earns the title of “triadic patent”. This title is very prestigious in the international domain, even being used to determine the technological strength of countries. When an invention obtains patents from US, Japanese and European offices, that invention often receives great attention from investors. Triadic patents are also used as a criterion by the World Bank or OECD when making lists. Japan is the holder of the largest amount of triadic patents (30%), followed closely by USA (26.32%), then by Germany (10.23%), Republic of Korea (5.75%), United Kingdom (3.2%) according to a study in 2013.* This study emphasizes China’s development and progress in patents, which increased its triadic patent percentage from 0.16 in 2000 to 3.51 in 2013 (from 87 to 1897 triadic patents). The paper also indicates that Turkey has 0.08% of the triadic patents worldwide. Turkey doesn’t have much information on triadic patents. Three of the five triadic patents belong to TÜBİTAK (Scientific and Technological Research Council of Turkey) (PCT/IB2009/051609, PCT/TR2006/000035, PCT/IB2006/050240), one belongs to Prof. Dr. Ali Doğan Bozdağ [(EP2004035 (B1), JP5329232 (B2), US8430814 (B2)], and the last one belongs to Prof. Dr. Nesrin Özören [(EP2841110 (A1), JP6026645 (B2), US9725491 (B2)].”